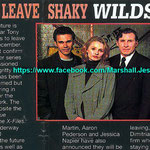 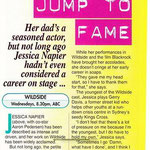 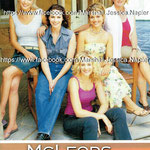 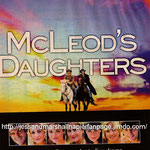 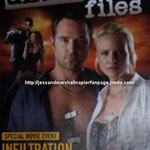 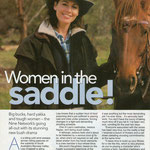 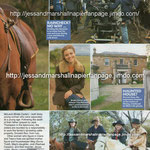 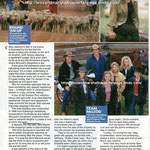 the parts of Lisa Chappell, Bridie Carter and Michala Banas 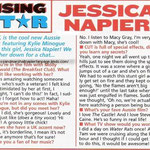 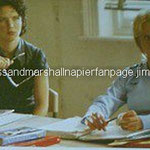 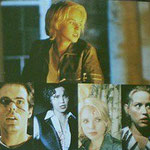 The beautiful Jessica Napier is one of the stars of the hit series 'McLeod's Daughters'. She took time out of her busy schedule to tell CCF a little bit about her life, about being a vegetarian and her absolute disgust at testing on animals.

I was born in Wellington New Zealand and lived there until I was nine. My parents brought me to Australia in 1988 where I've lived in Sydney ever since.
School was interesting because I had to change so many times. I think I went to about 9 different primary schools and three different high schools. I never made it to the end of year ten.
I think it's every little girl's dream to be an actress, but it wasn't something I seriously thought about persuing - it just kind of happened. It is difficult to pick my favourite role because each role has given me something different, although I really enjoyed playing Jade in the movie Angst.
I have been a vegetarian since the age of four, so nearly 20 years. It was difficult when I stayed with friends but now it is very much a way of life.
The reason I became a vegetarian is when I found out where meat came from, I vowed never to eat my animal friends again.
I'm an absolute animal lover. My boyfriend and I have a black and white cat called Cassius, although sometimes we refer to him as The Dog or Mr Humpy.
Testing on animals is a totally inhumane practice and in the year 2003, we as a nation should be able to recognise that such testing is cruel and unjust.
For those companies that continue to test on animals, I would ask people to please look at what they are purchasing, who they are supporting and weigh up if its really worth it. It's a vulgar practice and we do this for money and vanity. These animals have a right to their lives and we don't have a right to destroy them.

"It's a vulgar practice and we do this for money and vanity."

He has been single since splitting from fiance Lisa Christie late last year, and Jamie Durie is more than happy to keep it that way.

The 44-year-old celebrity landscaper and television presenter stepped out with none other than his brother Chris on his arm at the 5th Annual Sydney Chocolate Ball.

Durie - who is now based in LA after finding success as a regular on The Oprah Winfrey Show - was the emcee at the charity event on Saturday night. Backyard bachelor: Jamie Durie on the red carpet at the 5th Annual Chocolate Ball in Sydney on Saturday night

Walking the red carpet at the Grand Ballroom at Sydney's Hilton, the backyard bachelor didn't seem to mind the lack of a lady on his arm.

'I'm single and at the moment, and enjoying my quiet time,' he told the Daily Mail Australia.

'I've just been hanging out with friends, keeping busy... actually my date tonight is my brother. Real-life bromance: The 44-year-old TV presenter took his younger brother Chris as his date to the charity event [Celebrity gala: Australian cricketer Shane Watson was also at the ball, along with his wife Lee Furlong

Durie flew back into Australia for the charity gala, which raises funds for the FSHD Global Research Foundation to help find a cure for the debilitating facioscapulohumeral dystrophy – the most common form of muscular dystrophy in adults and children.

He looked dapper at The Great Gatsby-themed event, wearing a snug black and white pin-striped suit.

After gaining fame as the host of Backyard Blitz in Australia, the Sydney local made it in the US after becoming a personal favourite of screen queen Oprah.

He even got his own series in the US - The Outdoor Garden - which ran four seasons, but said he has recently finished up filming a 'secret' project in California. Black tie: The stunning blonde wowed in an all-noir floor-length gown with draping and lace detail

The new series will debut on a different US network, with Durie remaining hush-hush over the details of the makeover style program.

'It's all top secret, but it's a very different show from what I've done before,' he said.

In the meantime, between juggling his work as a TV host, furniture designer, charity worker, and author, Durie admits it can be hard to stay in shape.

'You've just got to keep moving,' said the former male entertainer, who first became involved in showbizz as part of the original Manpower Australia line-up in Nineties. He pointed to his good friend and celebrity chef Luke Mangan - who was behind the three course meal at the event - for keeping him in line.

'Luke is doing the food tonight, he knows, he'll tell you.

'It's all about eating nutritious food and controlling your portions.'

Mangan and Durie weren't the only celebrities at the event, with cricketer Shane Watson also in attendance with his wife Lee Furlong.

As a schoolgirl, Jessica Napier used to put off her homework so she could watch Les Hill in Home And Away. Now, in a strange quirk of fate, she’s playing the actor’s love interest in the roller-coaster series Rescue: Special Ops.


‘I turned 30, got engaged and moved to the suburbs,’ she says, chilling out at home in Sydney’s inner west with her fiance, businessman and amateur artist David Adler.


Life changes
The happy couple – who are planning a spring wedding – met through mutual friends four years ago and started dating 12 months later. ‘That’s when the timing was right for both of us,’ Jessica smiles. ‘But I won’t go into details about how many glasses of wine it took!’


Off-screen it’s clear she only has eyes for 33-year-old David, who proposed to her at a popular spot that overlooks Sydney Harbour.


‘I thought I’d better get that ring on her finger before we moved house, or I’d be likely to lose it,’ laughs the former lawyer and asset consultant. ‘I tried to put her off the scent, but she could see the engagement coming a mile away. I must be a terrible liar.’


Jessica, whose impressive TV credits also include roles in soapie Echo Point, Wildside and McLeod’s Daughters, jokes: ‘Yes, I realised what was going on. He’s about as subtle as a sledgehammer. I was on my best behaviour all day.’


Family ties
Playing lovable farm girl Becky Howard for three years on McLeod’s gave her the chance to work with her father, acclaimed actor Marshall Napier, for the second time in her career.


The first was when, as a little girl of 10, Jessica was cast as his daughter in the hit drama series Police Rescue, which starred Gary Sweet and Steve Bastoni. Then in 2002, the Napier duo went on to win $64,000 for the South Australian Animal Rights Group on a celebrity version of Who Wants To Be A Millionaire?


‘I’m an actor and a vegetarian like Dad, so I guess I followed in his footsteps,’ Jessica admits. ‘It was just something I fell into… 'After Police Rescue, he gave me an agent’s number and said: “If you want to do it, you can do it on your own!” So I got my first proper job and the rest is history.’


Humble beginnings
That first job was in the ‘ill-fated soap opera’ Echo Point, and it proved to be a real eye-opener.


‘I remember being driven out there in a limo,’ she says. ‘It was so different from being a normal kid working and earning $5 per hour. I was pretty spoilt! I look back now and I was a completely different human being.


‘I’m quite shy and awkward. That’s why it works with David, we’re opposites. The only similarity is that neither of us backs down in arguments. We’re both passionate people, we challenge each other. And I’m constantly learning from David. He’s a very clever guy.’